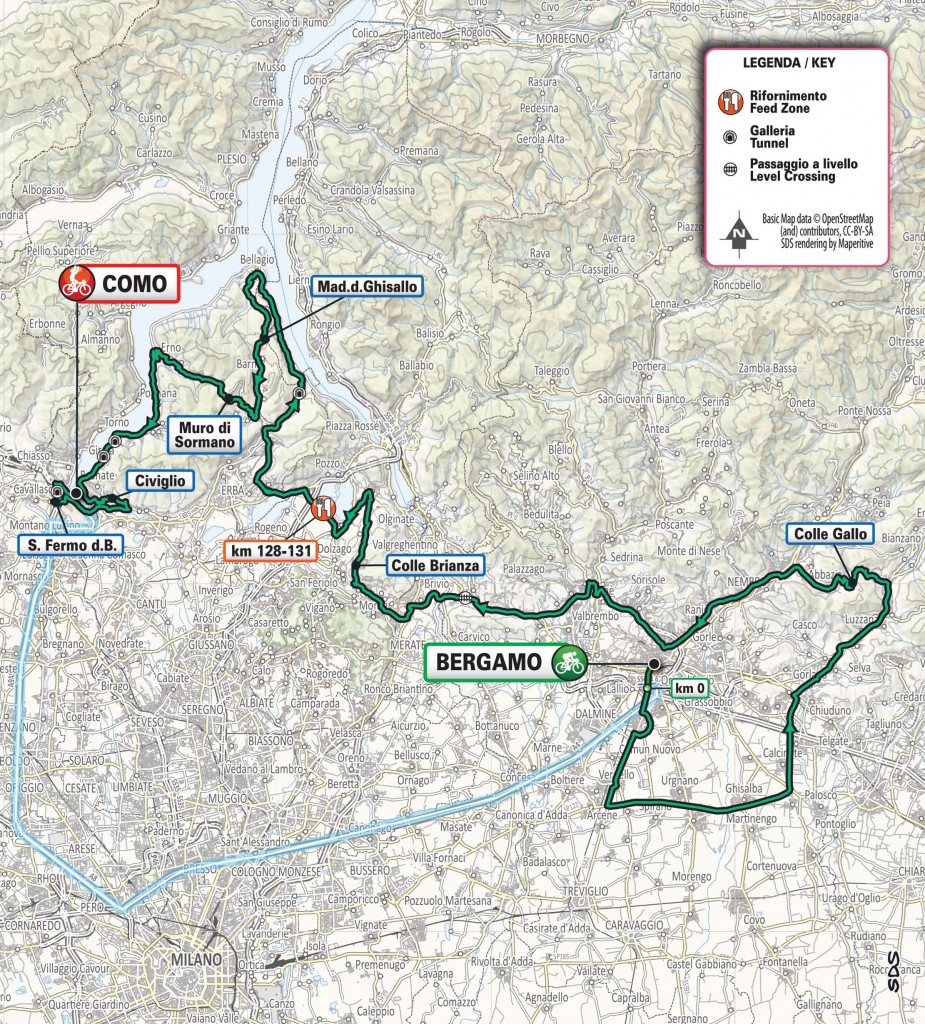 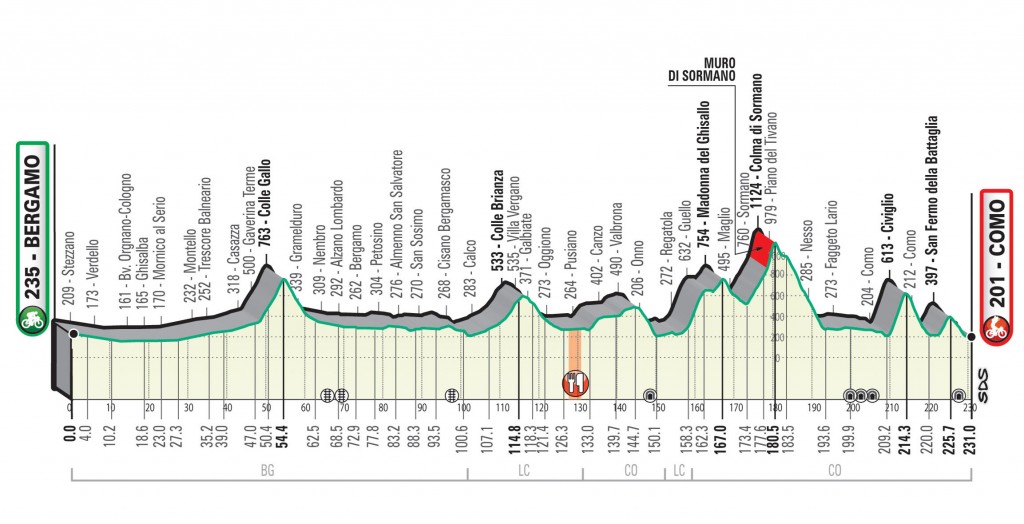 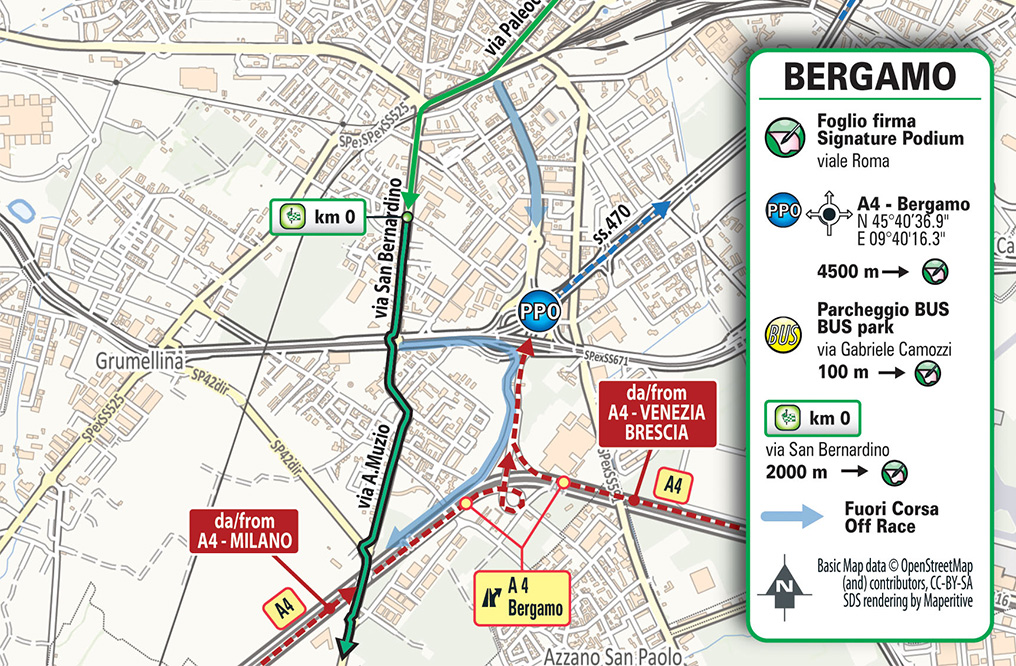 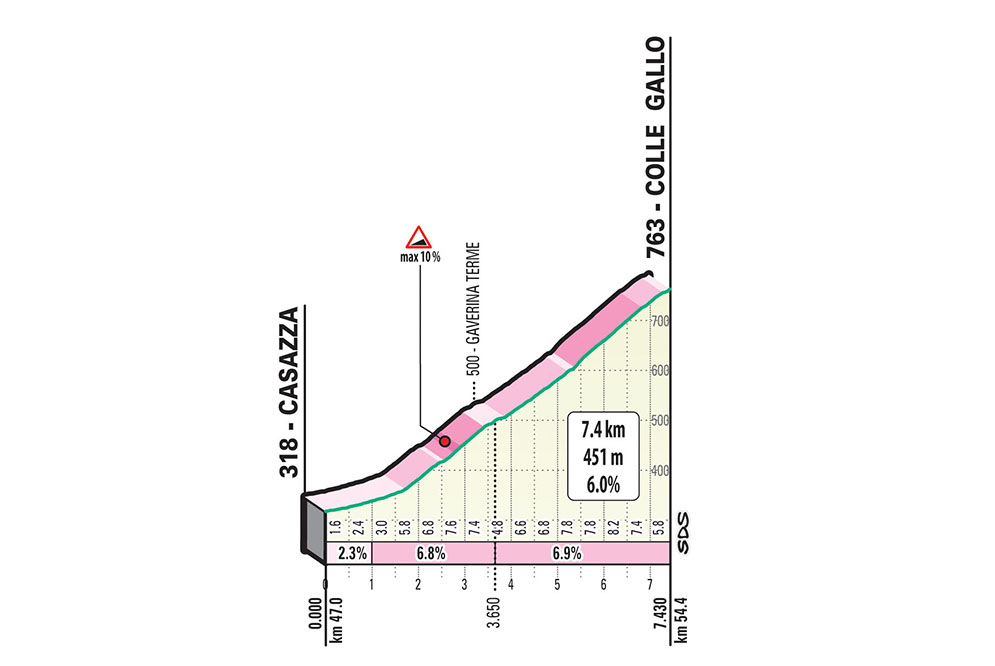 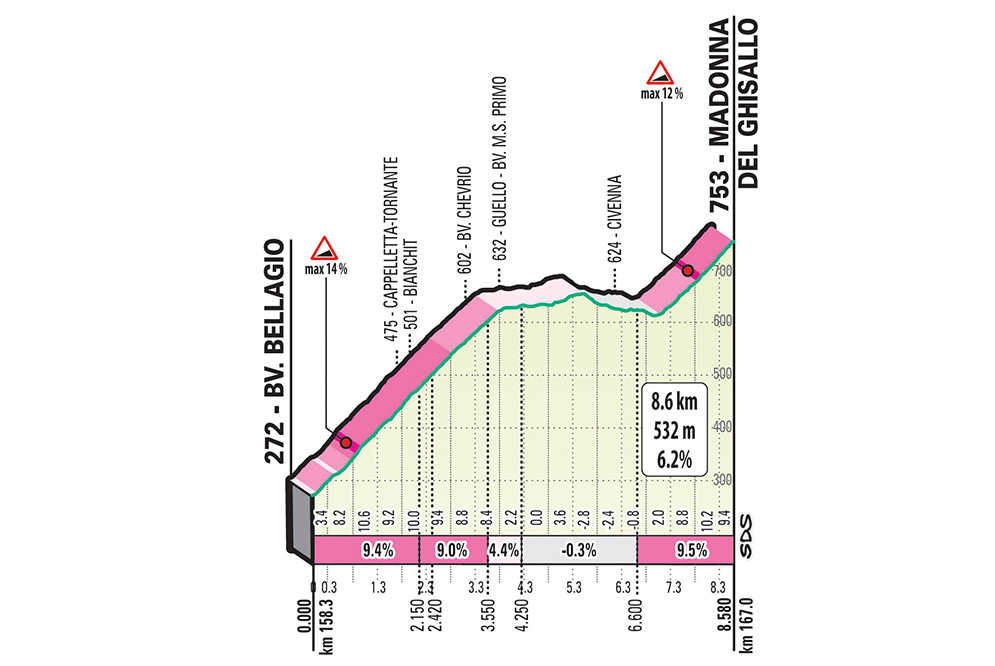 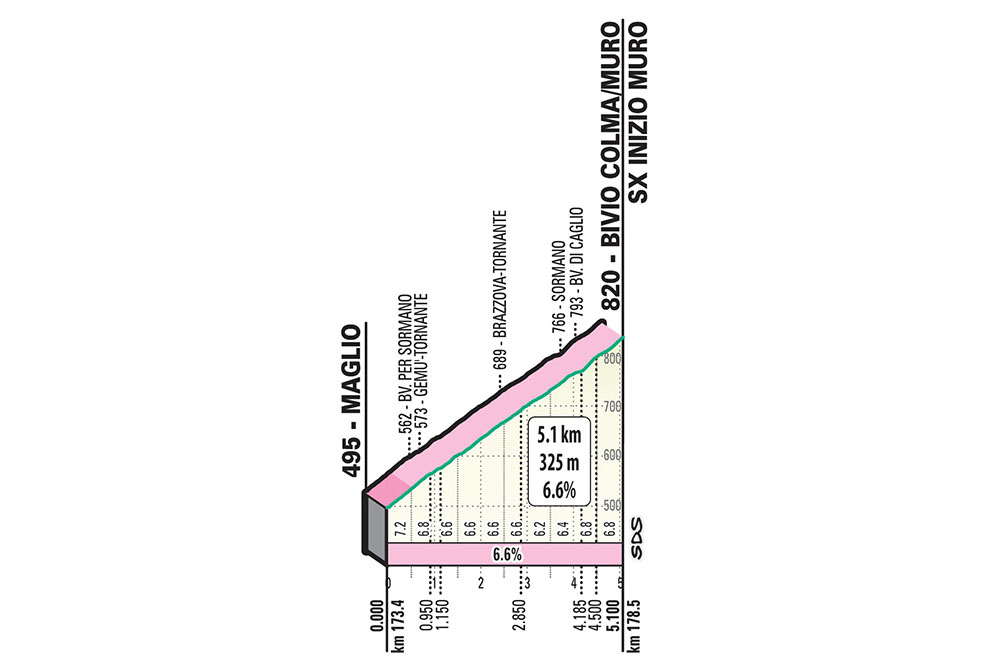 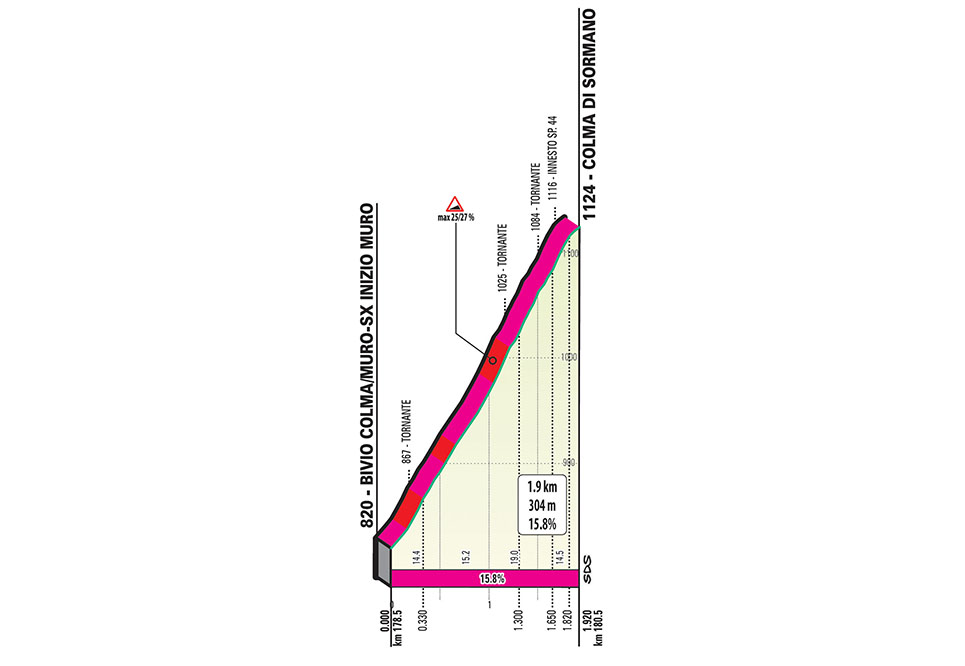 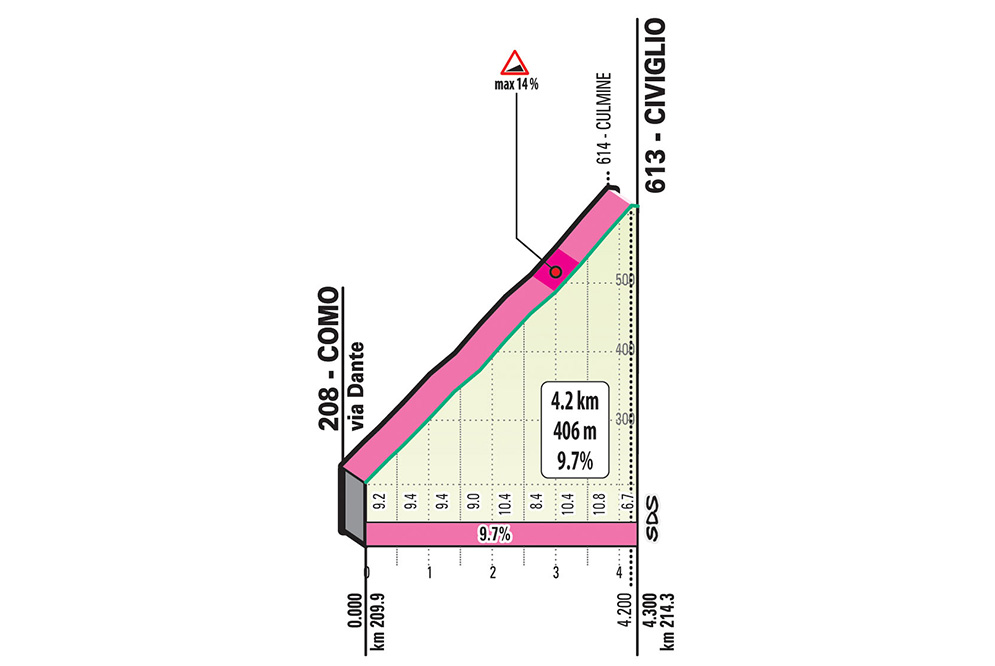 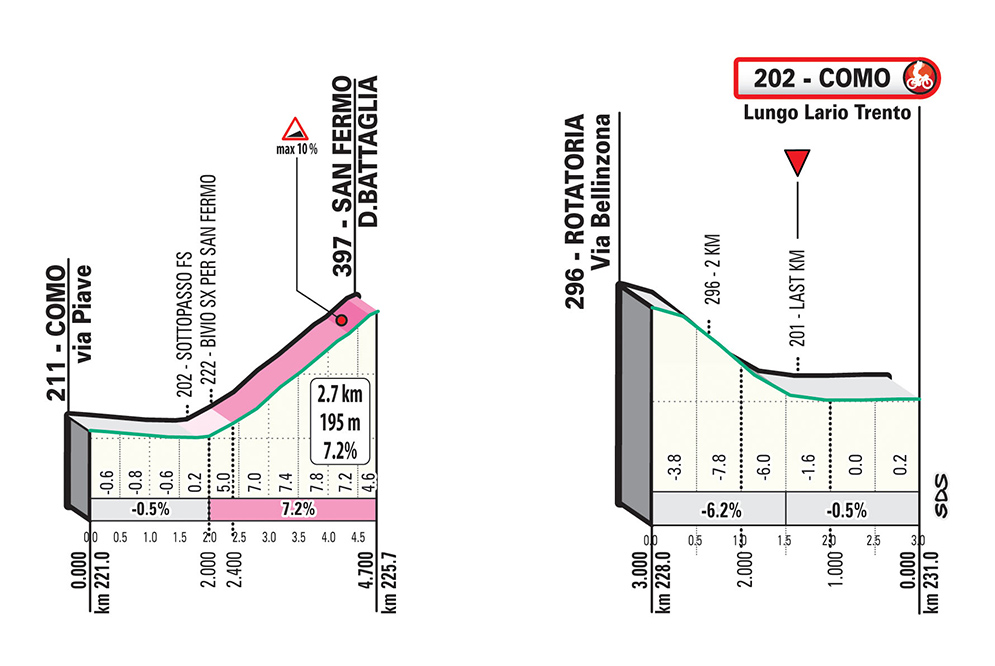 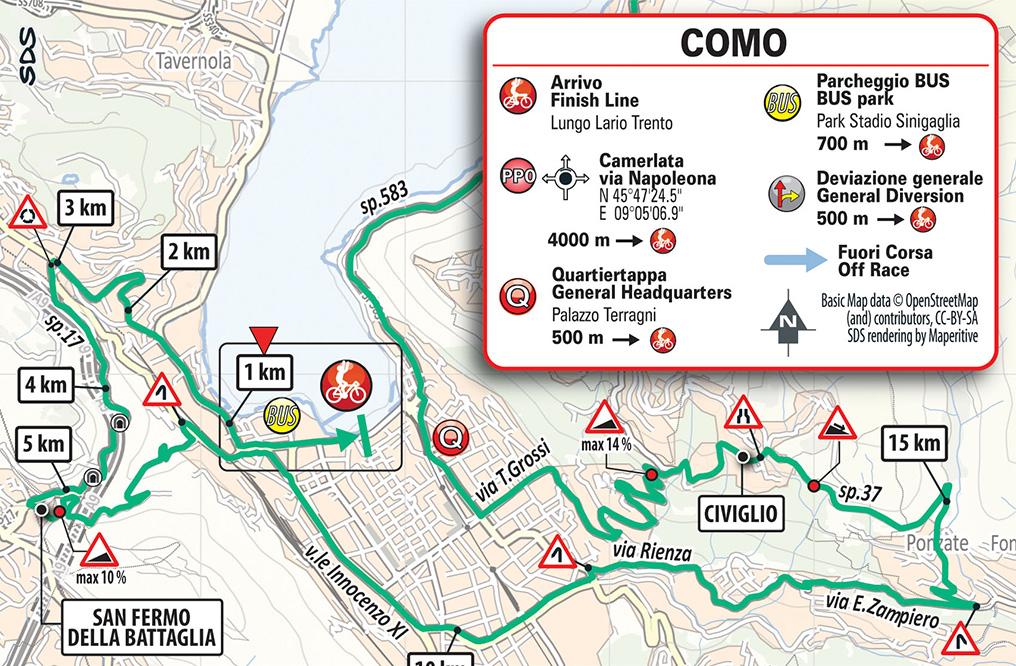 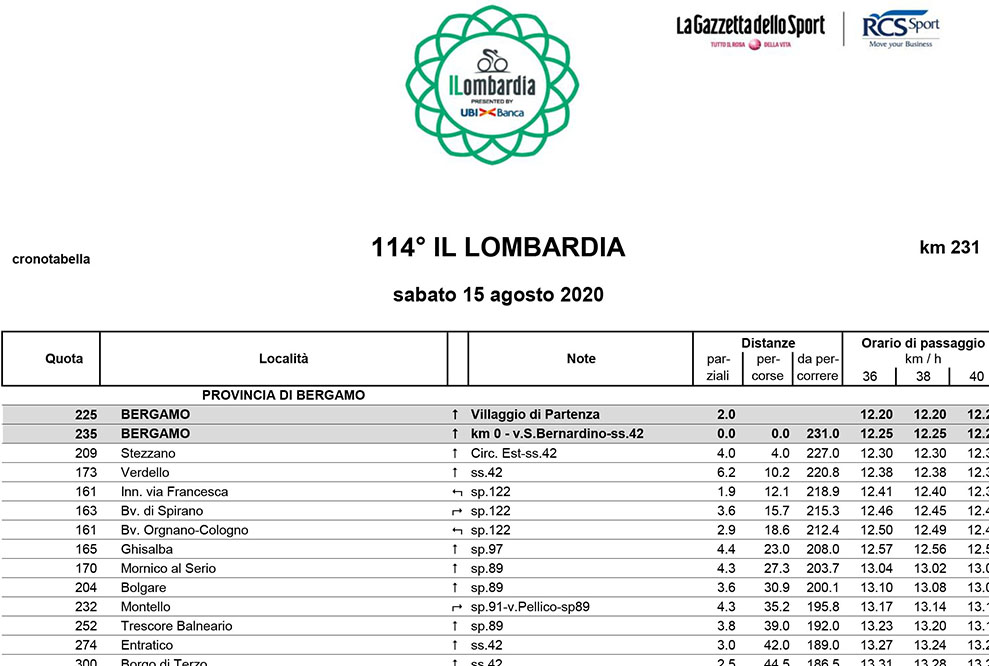 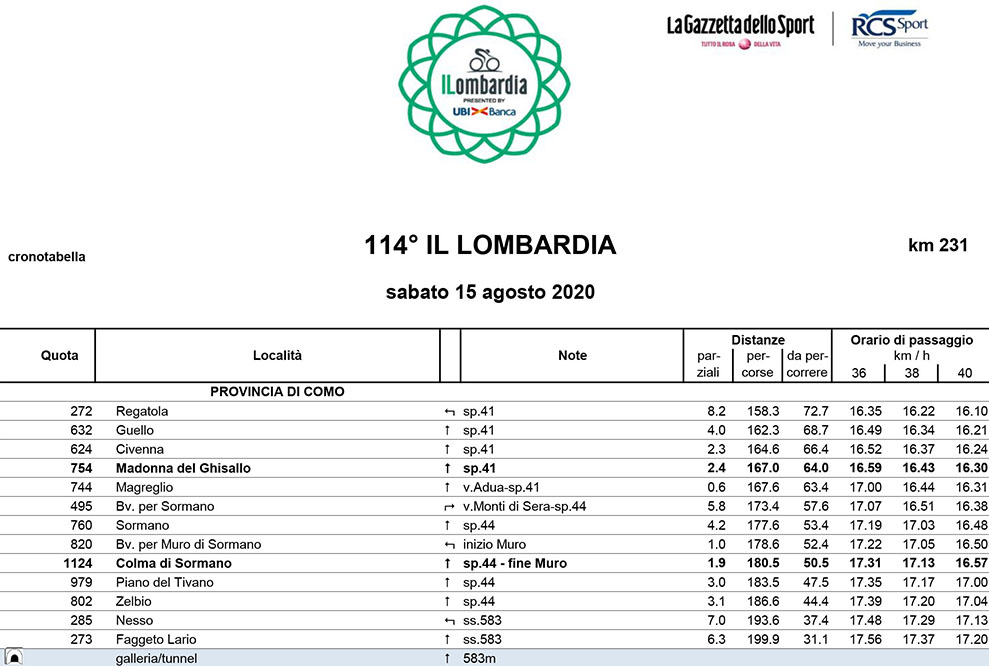 After departing Bergamo in a southerly direction, the route crosses the Bergamo plain in its first 40km to head up the Cavallina valley to Casazza where the Colle Gallo – the first ascent of the race – is tackled. Colle is followed by a fast descent returning from the Seriana valley to Bergamo, then the route re-enters lowland roads that lead to Brianza. There’s a short passage to Colle Brianza and a descent to Oggiono, then the route passes through Pusiano, Canzo, Asso and down the descent to Onno and on to Bellagio. This is where the Ghisallo ascent – with gradients of up to 14% on wide roads with hairpin bends – begins.

The following very fast descent is on long straights and ends at Maglio where, immediately after a right turn, the climb of the Colma di Sormano begins. After a few kilometers of medium slopes, and a few hundred meters after Sormano, the route heads up the Muro di Sormano on a narrow, very steep road – 2km long with a gradient up to 15%. It’s partly inside a small wood, with very narrow bends and slopes that, for around 1km, exceed 25% up to almost 30%.

Once past the Colma, the route follows the descent to Nesso, where the riders then take the coastal road to reach Como. Next they face the hard climb to Civiglio (614m) with slopes almost always around 10% – and with a marked narrowing of the roadway at the top of the climb – before going back down and through Como to hit the last climb of San Fermo della Battaglia (397m). There is one feed zone, at km 128-131.

The last 10km start inside the area of Como on wide avenues, up to the railway underpass where the final ascent of San Fermo della Battaglia begins. The slope is around 7% (max 10%). The route passes several hairpin bends up to the brow at around 5km from the finish. The descent, on a wide, well-paved road ends at the last kilometre.

Bergamo (Start)
Bergamo is a small “two-storey” city in Lombardy, with a rich history and a stunning architectural legacy. The walled upper town, Bergamo Alta, is beautifully preserved, with wonderful cobbled streets and lovely mediaeval buildings. The modern, lower town, Bergamo Bassa, is connected to the older, upper district via a funicular railway. Major landmarks include the Venetian walls, which were built by the Republic of Venice in the 16th century, when Bergamo was a possession of that State, in order to protect the city from the Republic of Milan and from France, when the Republic of Venice was starting to lose its monopoly of maritime trade. These walls – a symbol of the rich and bold history of Bergamo – are the keepers of a beautiful city, waiting to be explored.

Bellagio
Bellagio is a charming little city on Lake Como, perched right at the meeting point of the two branches. It is referred to as “the pearl of the lake”, because of its central location and for its unique beauty. The marina and the lakefront definitely deserve a mention: here, you can take a walk and enjoy the landscape, amidst the picturesque colourful houses. Bellagio also boasts of two splendid villas overlooking the lake, Villa Melzi and Villa Serbelloni. The latter is famous for its gardens, with countless varieties of plants, as well as statues, small caves and fountains.

Madonna del Ghisallo
The Madonna del Ghisallo sanctuary is one of the most renowned destinations for cyclists worldwide, and some of the major cycling competitions, including the Giro d’Italia, have cleared this iconic climb. The Virgin Mary of Ghisallo has been revered as Patron Saint of cycling since the late 1940s. The bronze busts of Gino Bartali and Fausto Coppi await visitors just outside the sanctuary, while inside, the icons of the Virgin Mary and of Baby Jesus are surrounded by bicycles, trophies and pictures of cycling aces. And it is no coincidence that the Cycling Museum was constructed on the grounds of the sanctuary.

The “Muro di Sormano”
Legend and challenge go hand in hand along the “Muro di Sormano”. No introduction needed, here. This is the perfect destination for any cyclist looking for an iconic and challenging climb, with sweeping panoramic views. Measuring just under 2 kilometres, it is one of the harshest climbs in the world. Back in the 1960s, it featured in the route of the Giro di Lombardia for three years; it was later dismissed, and made its comeback in 2006 when the old road surface was transformed to pristine tarmac. Each metre of it is numbered, and elevation is marked.

Como (Finish)
Como is an elegant and lively town, lying on the southwestern branch of the lake of the same name, in a unique natural landscape and surrounded by lush verdant hills. Luxurious villas, elegant buildings and ancient churches highlight the beauty of the city, while the lovely alleys and the colourful piazzas add to its charm. Como is also referred to as “the city of silk”. Back in the 1400s, Ludovico Sforza, Duke of Milan, decided to plant mulberry trees around the lake to feed the silkworms, and the city has been the largest silk producer in Italy since then. The most stunning piece of architecture in town is the splendid Duomo (the cathedral), dedicated to Santa Maria Assunta. Its construction began in 1396, and lasted four centuries overall, in a splendid fusion of styles – Gothic, Renaissance and Baroque. Como is also renowned for its lakeside villas with lush gardens, such as the Neoclassical Villa Olmo, built in 1780, now a popular venue for congresses, events and art exhibitions. The city has become one of the major tourist destinations in northern Italy, and is a hit with Italian and international celebrities alike. 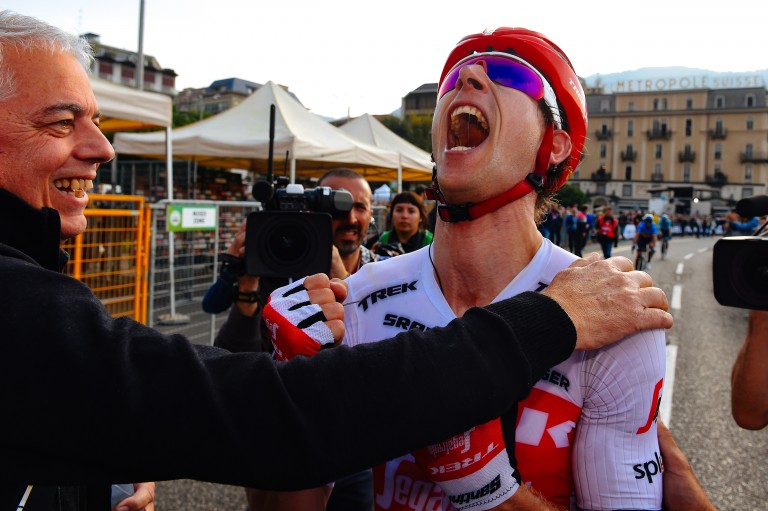 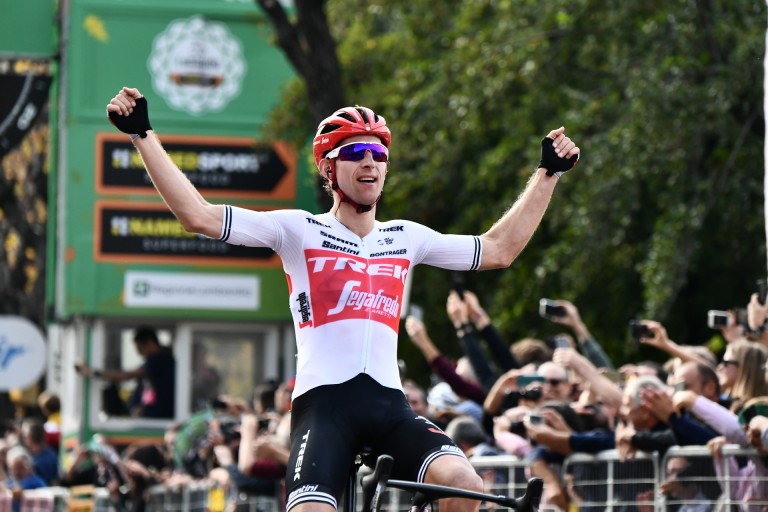 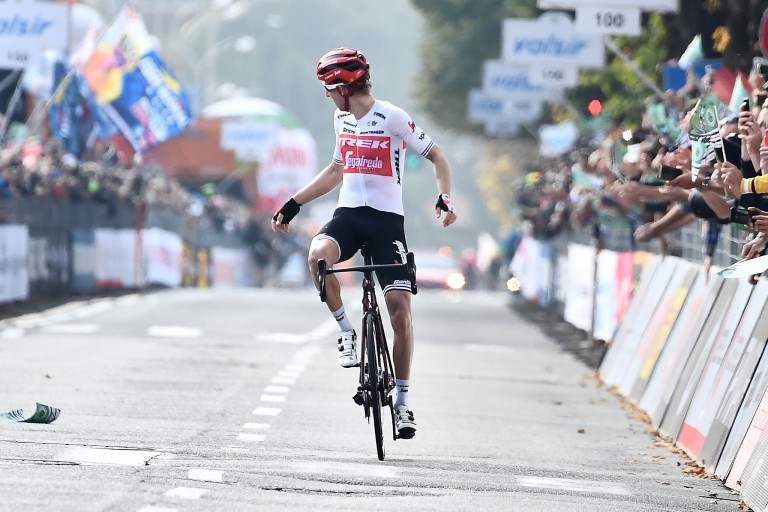 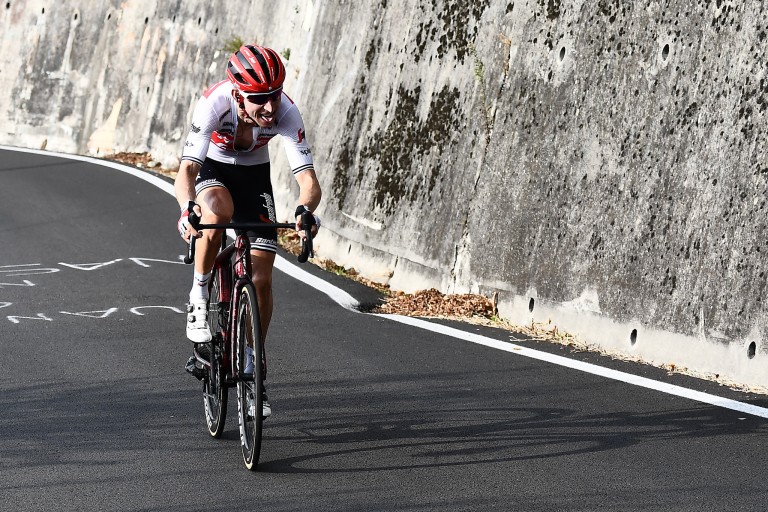 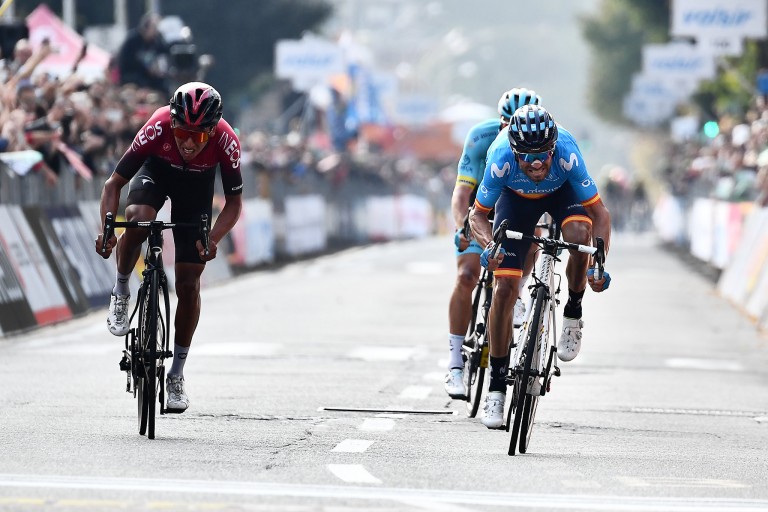 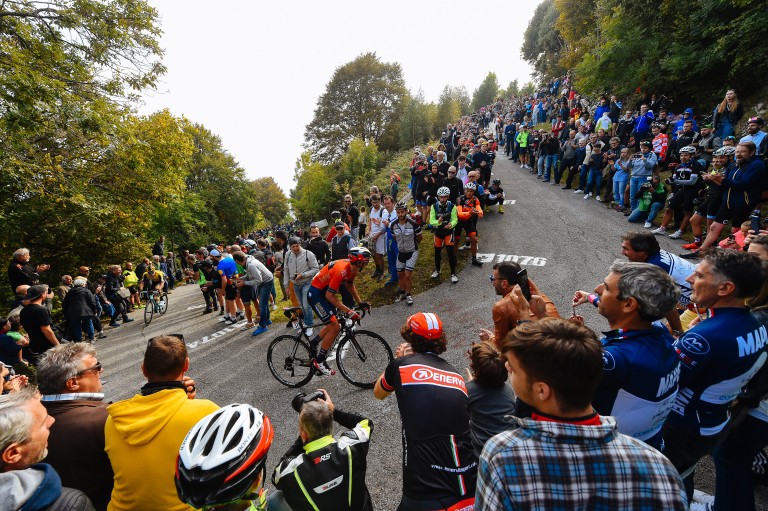 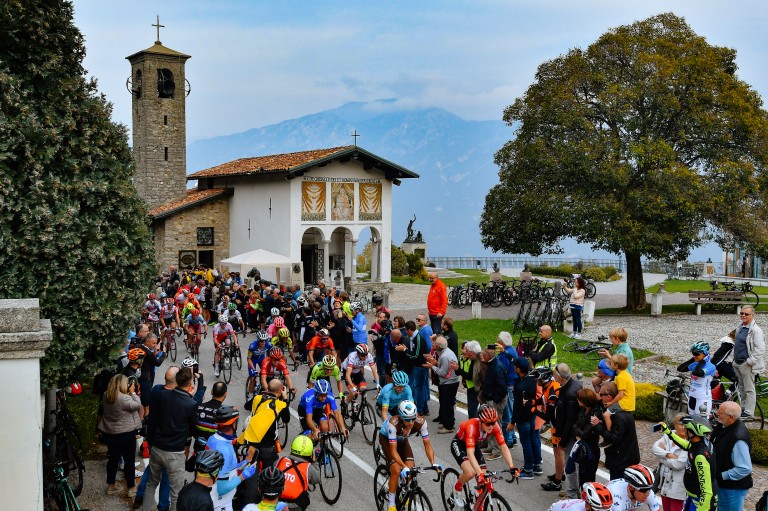 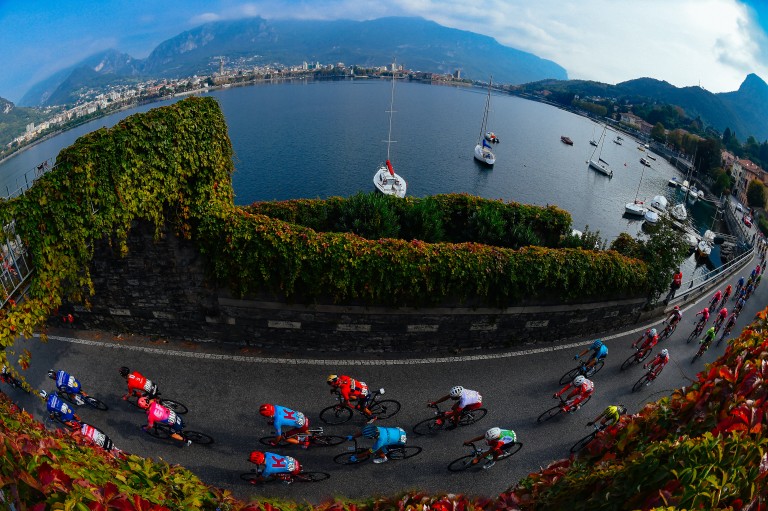