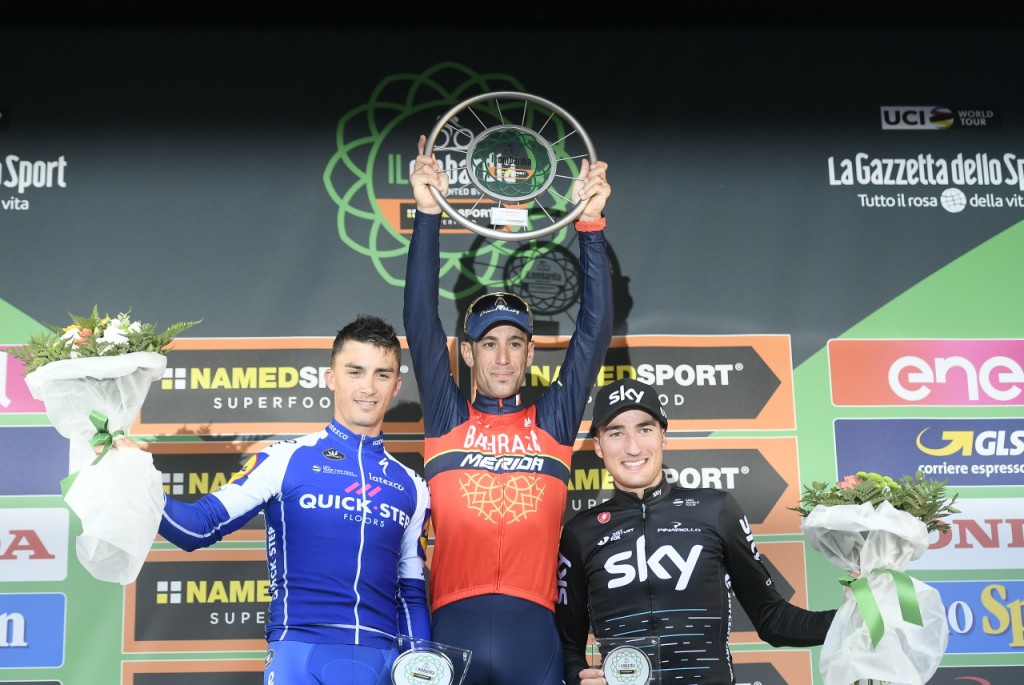 Nibali wins Il Lombardia solo in Como, repeating his victory of two years ago and obtaining is 50th win as pro. Alaphilippe took second place and Moscon third to complete the podium on the lake’s shore.

Vincenzo Nibali won Il Lombardia for the second time on the same finale as two years ago, using the same tactic throughout the downhill to drop his rival, Frenchman Thibaut Pinot, with 12km to go. Another Frenchman, Julian Alaphilippe, jumped to claim second place in Como while Italy’s Gianni Moscon rounded out the podium. This was Nibali’s 50th victory as a professional rider.

Race winner Vincenzo Nibali said: “I was in a better condition today than I was two years ago; I knew the downhill better. I had more confidence too. A win in a Monument has a higher value than a stage in a Grand Tour, as I got this year at the Giro with the Stelvio and at Andorra in the Vuelta. The most difficult thing for me was to maintain my condition after the Vuelta – Il Lombardia kept me focused.

“The first one was harder to win because there was the fear that I hadn’t won a Monument yet. Today everyone was controlling me, Quintana and Uran in particular, so I had to redistribute the cards. When Pinot attacked, I let him go and I went after him 1km before the summit. Then I thought of nothing. I just went straight on and flat out. When I turned pro, [sport director Stefano] Zanatta told me I had downhill skills that I could use either for attacking or defending. It’s still the case now. I’m 32, not 33 yet, but I feel young and strong.”

Runner-up Julian Alaphilippe said: “It’s incredible. I didn’t expect to finish on the podium today. I had a strange feeling after the World Championships, but I kept focused and my team did a really good job. I did my best but I couldn’t follow Nibali when he attacked. I’m not disappointed, it’s already something special to finish on the podium of a Monument. My thoughts also go to my team-mate who crashed during the race while he was at the front. I heard he’s OK, I strongly hope so. I want to thank my team for their work in my favour today, and I will return to the Italian monuments with the aim of doing even better than third in Milan-Sanremo and second at Il Lombardia.”

Gianni Moscon, who took third place, said: “A Monument is so special, so to make the podium today is amazing. Even if I didn’t win a race this year, a podium here in Como is fantastic and worth a victory – it’s the best way to close my season. Nibali was the strongest on the last climb. I tried to attack Civiglio but everybody was tired after 200km or more of racing pretty hard. After the Sormano wall, your legs feel stiff. Even if I went with Nibali I’d have been dropped in the next climb like Pinot was. I’m happy with third place. After this, I can take more responsibilities in the team. My condition is on the up after the Vuelta. This increases my ambitions for next season – I want to be at the top of my condition for the Spring Classics.”

The Todisco Prize, won by the first rider who arrived at the top of the Madonna del Ghisallo climb, has been awarded to the French rider Mikael Cherel (AG2R La Mondiale).