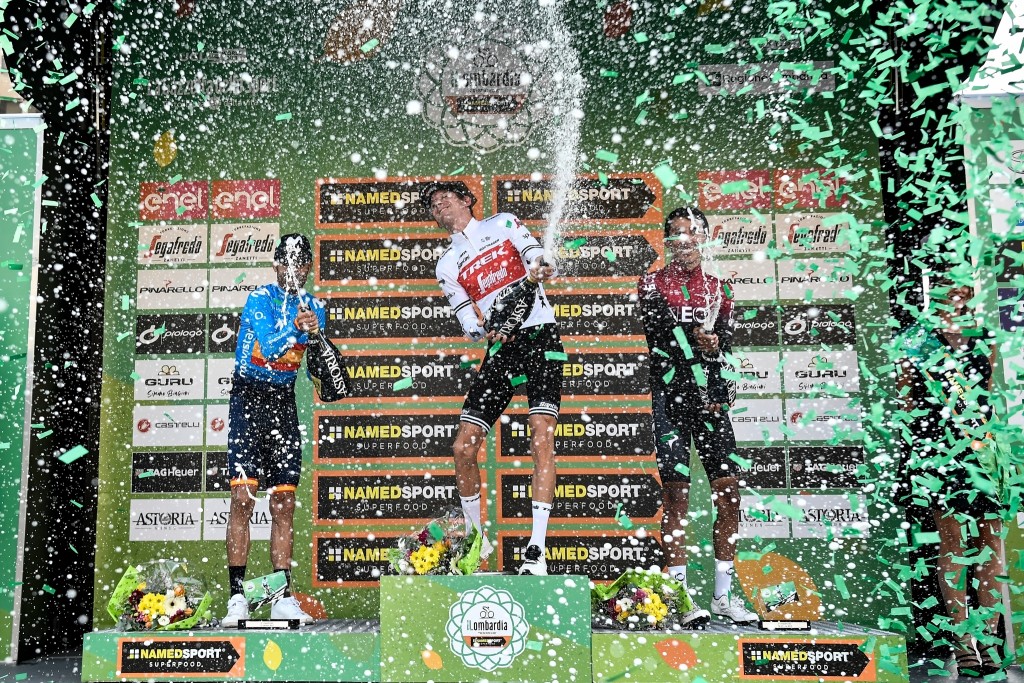 Bauke Mollema (Trek-Segafredo) won his first Monument at the age of 32 as he soloed to victory in Il Lombardia NamedSport after a well-timed attack with 18.5km to go on the Civiglio climb. He fended off the return of Alejandro Valverde (Movistar Team) and Egan Bernal (Team INEOS) who rounded out the podium.

Bauke Mollema took the fourth Dutch victory in the history of Il Lombardia after Jo de Roo in 1962 and 1963 and Hennie Kuiper in 1981.

Bauke Mollema is the ninth oldest winner of Il Lombardia at the age of 32 years and 320 days, preceding Kuiper who won at 32 years and 256 days. Tano Belloni his the oldest, having won in 1928 at 36 years and 69 days.

Alejandro Valverde is the oldest podium finisher at 39. Previous record was held by Franco Bitossi who was 37 years old in 1977. Besides Valverde and Bitossi, only Fausto Coppi made the podium aged 37 or older, when he came second in his last Il Lombardia in 1956.

To find a podium finisher younger than Bernal, 22, we have to go back to 2008 with another Colombian, Rigoberto Uran, who came third, aged 21.

The winner, Bauke Mollema said in the post-race press conference: “Once I had 20 seconds lead, I was surprised that the gap went up pretty fast. They were watching each other at the back. I was pretty sure that I’d still be first atop Civiglio. I didn’t know what was happening behind, but as I heard that I still had a 20-second lead, I had a good chance to win. I knew the downhill well, so I just time trialled until the finish. The last climb wasn’t super hard. I knew it. At one point I looked down and I saw Roglic was still pretty far away, so I was confident. With 1 or 2km to go, I was sure that I was gonna win. I had a good rhythm and they weren’t closing on me. Winning a Monument is a great way to finish the season, it’s nice that I had time to celebrate, my parents were here, it’s been a special moment.”

Alejandro Valverde, second, said: “I’m happy with the second place because it always means something to make the podium at Il Lombardia. Mollema is the winner. Hats off to him. He attacked well and maintained a good pace. We didn’t get much organised behind him. One of us attacked, then another one. I had the legs to do a little bit better. I could have won but unfortunately it didn’t happen.”

Egan Bernal, third, said: “To be honest, I didn’t think this morning that I would have made the podium. It’s something really big for me. Il Lombardia is my first Monument with a podium place. I’m happy with this and I’m happy with the form I’m finishing the season with. Mollema was very strong when he went on the climb. He got a gap and we were riding very hard behind him. Roglic attacked but at the end of the day, Mollema was the strongest because he managed to keep his advantage. I’d like to win a Monument like this one day but it’s difficult for me to stay at the front of such a hard race. I’m still only 22 years old and I’ll do my best to improve my cycling and my results in the coming years.”

This morning at the start from Bergamo, Norma Gimondi and Maurizio De Grassi, Federica Gimondi’s husband, received two lithographs created by Riccardo Guasco, in the presence of Mauro Vegni, RCS Sport Cycling Director and of Loredana Poli, Councilor of the Municipality of Bergamo.