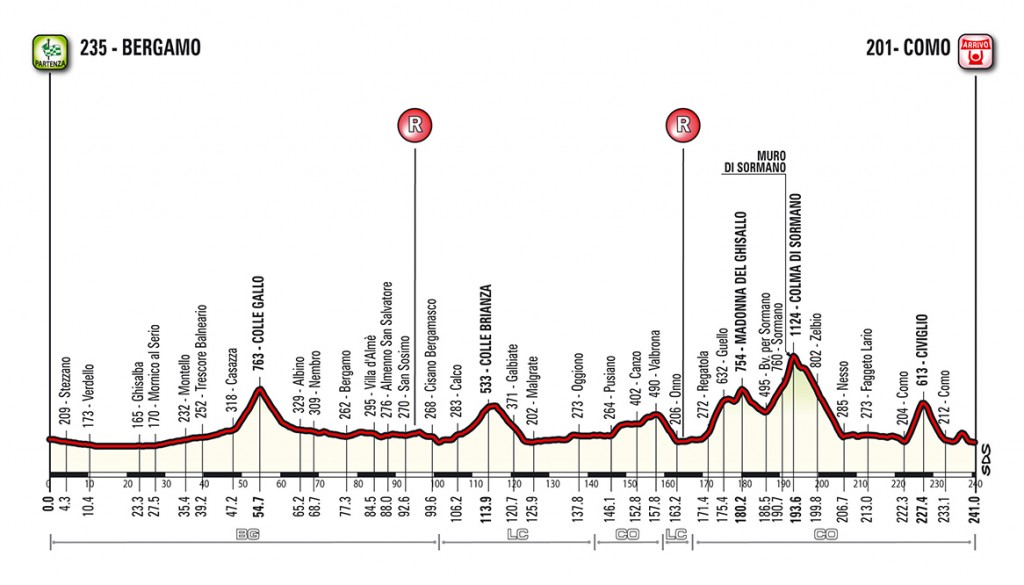 Great cycling is back on the roads of the Lombardy region. On Saturday 13 October the 112th edition of Il Lombardia will start from Bergamo and finish in Como after 241km. The “Classic of the Dead Leaves”, the last Classic Monument race of the season, will run almost on the same route as last edition, when Vincenzo Nibali rode to a solo victory, with the only modification being in the finale.

It’s a highly selective route with six climbs and 4,000 meters of vertical elevation. The first climb, Colle Gallo, is followed by Colle Brianza; and after the town of Onno the riders climb the Madonna del Ghisallo, followed by the Muro di Sormano. After passing the Colma di Sormano the race descends to Nesso and onto the Civiglio climb. After this climb in last year’s race the route turned left to climb Val Fresca towards San Fermo della Battaglia, but this year will go straight until Via Camozzi roundabout where it will meet the descent of the previous course to then face a short punchy climb, 1,700m long with 5% average gradient and a maximum of 9% to end in the Monte Olimpino hamlet. From here it’s just 3km to the finish line on Lungo Lario Trento e Trieste.

Mauro Vegni, RCS Sport Head of Cycling, said: “It’s always highly satisfying to present the Il Lombardia course, the last of the Classic Monuments of the season, traditionally the first occasion for ‘revenge’ after the UCI Road World Championships. A race that has seen all the great champions of the sport winning in its history of more than 100 years. Today though I would like to focus on the role of the race in this amazing region, Lombardy, my home for many years; a land with uniques places, such as Bergamo and its Unesco Heritage walls where we will start, and Como, with its world famous lake, where we will finish. In between are climbs engraved in cycling history, such as Madonna del Ghisallo and Muro di Sormano. But it’s not only cycling: we will go, for example, through Bellagio, one of the most picturesque places in the world. Il Lombardia’s history has been part of Lombardy’s global fame, which makes us really proud. And the race, again, has a further role, starting from the experience of last year’s weekend we wanted to repeat the Gran Fondo. Sportive riders will face most of the very same course of the pros, with a new finale that we developed together with the local authorities, ending on the top of Civiglio. We want to consolidate this two-day experience to benefit both the riders and the territory. We believe that the marriage of sport and tourism is the way forward for mutual future success.”

On Sunday 14 October, amateurs will have the opportunity to ride on the same roads (starting in Como and finishing with the Civiglio climb) faced by pro riders on the previous day, with climbs such as the Ghisallo, Muro and Colma di Sormano and Civiglio. Registrations are open on www.gflombardia.it